I am so excited that our Scout Group has been chosen to pilot the widescale use of the iWoggle. Here’s the official press release from the Scout Association. 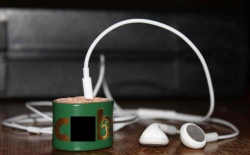 We are thrilled to be able to announce that a collaborative effort between the Scout Association and a leading Technology Solutions Provider has resulted in the advent of the iWoggle.

The Scout Association has felt for some time that the humble Woggle needed reworking for the 21st century. Many Scouts have been choosing to wear Friendship Knots in preference to Woggles – we are now able to offer our Scouts a truly innovative alternative which will impress their friends and enhance their Scouting experience.

> Beaver Scout Leader Stu Piddley-Bouncey was involved in some of the earliest iWoggle trials. “We’re all delighted with our iWoggles. We did have one or two nose bleeds in the early days. The first prototype iWoggles were the size of an old ghetto blaster, so quite cumbersome and heavy. The Beavers would periodically topple over”

> Cub Scout Leader, Ivor Scruloose is delighted with his iWoggle. “My vocal delivery has been compared to the sound of a large, lethargic, low flying bumble bee. I’ve been using the iWoggle to mix my voice with Lady Gaga. My Cubs never used to listen during Grand Howl, now they stare at me in open-mouthed wonder. My Lady Gaga accessories possibly help too.”

> Senior Roving Commissioner Neil Beforeme-Underlings has been trialing the high-end iWoggle with built in hard drive, “I’ve stored all my favourite boyhood Scout Camp experiences on my iWoggle. When there’s nothing to watch on the telly, I can think of no better way of spending time than listening to my own witty stories delivered in my own inimitable voice on my iWoggle. I can hardly wait for the upcoming 160GB version of the iWoggle – I’ll be able to store a selection of my Cub Camp stories too”

A number of Scout Groups throughout the UK have been chosen to pilot the next phase of iWoggle delivery.