We are one of the oldest Scout Troops in the world; formed in 1908, officially registered in 1909 and operating continuously since then. 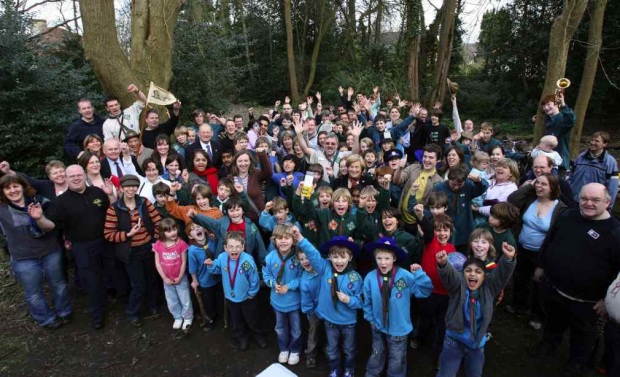 The 14th Highfield Scout Troop was officially registered in March 1909, being founded by the senior curate of Highfield Church, the Reverend Croome-Roach. Although the official registration was not made until 1909 the Troop started some time in 1908. Like so many early Troops, it was started by a group of boys, who only later looked for a man to become Scoutmaster. While the Scout Group celebrated its Centenary in March 2009, it is interesting to note that the 40th anniversary of the Group was celebrated in 1948, taking the date from the actual formation, rather than the official registration, and the Rev Croome-Roach attended.

Initially we met in the parish hall in Chaplin Street which is now called Roselands Gardens.

We are the oldest surviving Scout Troop in the town that still retains its original troop number (14th) and scarf colours (green/brown).

Our first Cub Pack was started on 30 Jan 1914 and is the oldest cub pack in Hampshire.

In 1914 War was declared while most Southampton Troops were camping at Alum Bay in the Isle of Wight. The war work of Southampton Scouts included the census of aliens, work in the docks, bridge guarding, etc.

In March 1915 the troop wanted a new trek cart so a party of them went to London by train, purchased the new cart, and walked all the way from London to Southampton with it. The journey of just over 87 miles was covered by the Scouts in the record time of twenty-seven hours.

All in all ten Highfield Scouts died in the war: two Patrol Leaders and eight Scouts. After the war, the 14th were decorated by the French government for the troop’s assistance to French forces and wounded up at the Rest Camp.

1917 Military Cadet Medal Presented to the 14th Highfield Scout Troop by the French Ministry of Defence for assistance given to French forces in Britain. 1914-1918 war.

Mr Burton was the Scoutmaster from 1911 to 1928 and after a highly successful jumble sale in 1919 which raised a staggering £112 they bought an ex-army hut which was the scout hut until the 1960’s.

Scouts have always been involved in supporting the local community. For example, stopping run-away horses and helping to put out fires.

In 1911 the Scouts were praised in the local paper for putting out a furze fire on the Common.

In 1928 Scouts were helping to kill rats for National Rat Week.

The group has been in continuous existence since 1909 except for 1939-43 when Scouting ceased during the second world war.

The Jeffery brothers, Fred and Phil, joined the Highfield cubs in 1914 and were still Rover Scouts as late as 1928 when Phil attended the Whitsun Rover Moot at York Wood Park in Warwickshire – one of the last jamborees at which Lord Baden Powell was present.

During and after the first world war many of the Scouts at the Chaplin Street Hut (now Roselands Gardens) lived in the immediate vicinity. The Jeffery boys were at 57 Highfield Lane and Charlie Stocker lived next door to the old Highfield Hotel where his father ran a boot and shoe repair shop.

Using their trek cart several camp sites in the New Forest were visited, the most popular being at Longdown, Colbury in 1923. In 1922 and 1925 the Scouts, Cubs and Rovers held a camp at Bowden’s Farm, Waldich near Bridport. Branscombe in East Devon was the site in the summer of 1927.

The most ambitious site was alongside the abbey – then under construction – at Buckfastleigh in South Devon (1922). All the camping gear was pushed in the trek cart by the Rovers there and back – a total of 270 miles!

Arthur Jeffery joined the cubs in 1946 and was the very first cub to get the Silver Wolf badge. Later, when his own son was in the troop, Arthur joined the parent’s committee. He retired from the committee after twenty years, in 1999, and was made an Honorary Vice President of the District.