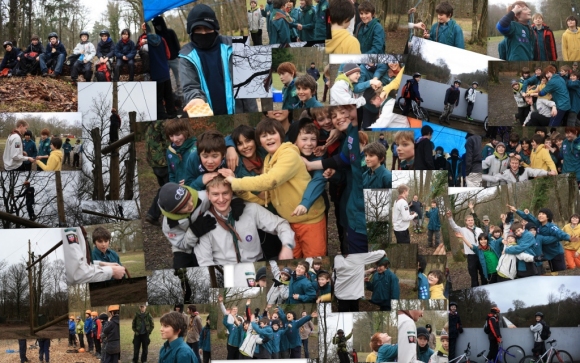 Our Winter Camp marked the first camp of the “Camp a Month Challenge” and it went off with a bang! Putting the tents up in 50mph gusts of wind in the dark was a challenge, but eventually everything slotted into place!

Throughout the weekend the scouts cooked what I honestly believe was the best camp food we’ve ever had! Chicken curry (no jars of sauces, just spices/chillies/garlic etc) with mango chutney and poppadoms on Saturday night, and home baked “normal” pizzas, cooked in the new camp ovens that we made at the start of the term. Phenomenal! Even the fires were a roaring success – thanks to Josh’s tumble drier fluff, Simone’s fire steel, and the home made firelighters that we made the previous week, we lit two fires without matches!

[simage=329,200,n,left,left] On Saturday we split into two groups and went on a mammoth bike ride in the New Forest. On Sunday we tried something different – the new High Ropes course at Ferny Crofts; and after our delicious pizzas, we invested Max into the troop.

A brilliant camp – and we raised £13 towards our first twinned toilet.

END_OF_DOCUMENT_TOKEN_TO_BE_REPLACED

The Cubs and Scouts came together last weekend for a brilliant group camp. We were fortunate enough to have absolutely perfect weather so managed to do all sorts of exciting and challenging activities.

Ed: From a Scouts point of view, it was fantastic to see the new troop gel together, with new assistant patrol leaders and patrol leaders taking over from where the old ones left off at the end of summer camp – congratulations to them. Equally impressive was seeing scouts helping each other, even the brand new scouts helping older scouts!

This is the start of what I am sure will be a great year for the scouts and us leaders! Roll on the next camp – sadly we’ll have to wait 5 months now!!

Neil: Our Cubs had a great time too. They seemed to be up for everything from the massive Foxlease zip-wire to doing the washing up! My favourite activity was our big Saturday afternoon Treasure Hunt through the New Forest which was set up by George, one of our Young Leaders. I was really impressed with how the Cubs hiked with maximum enthusiasm – and minimal moaning! – and was pleased to see they had a real and well deserved sense of achievement at the end.

As well as the Activities, I think they’ll also remember the Wide Games in the dark, the Campfire Circle, the Tin Can Football Challenge, the “Adder” in the woods (ask them) and the fantastic food, courtesy of Maggie and Susy. I think our four newest Cubs deserve special mention too – they camped like Cub Camp Veterans and we were delighted to be able to Invest them on Sunday afternoon. Follow this link to see the Cub Photos on flickr.

Finally, from Nico, Ed and Neil, many, many thanks to all those who made the Camp possible, who dedicated countless hours of their precious time to make it happen and who helped it to run so smoothly.

END_OF_DOCUMENT_TOKEN_TO_BE_REPLACED 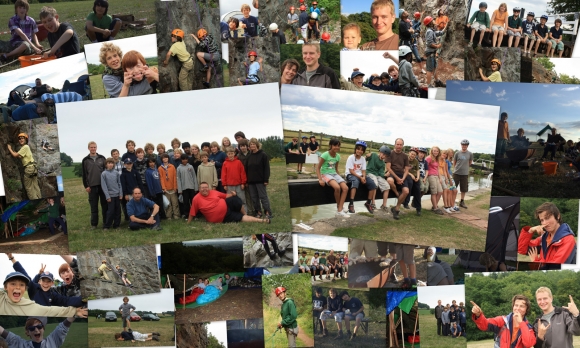 END_OF_DOCUMENT_TOKEN_TO_BE_REPLACED

Fourteen scouts, three leaders and a few frisbees went on camp for a weekend in June. Despite getting the frisbees far too high up the tree to be safely collected, fourteen scouts, three leaders and the same number of frisbees safely returned! The photo on the left isn’t a pile of sleeping bags, it’s a pile of scouts who “slept” under the stars, and amazingly, even managed to stay awake for the rest of the day!

We “stretched” our scouts with a hike on Saturday then a bit of flag-pole pioneering for investing people, then on Sunday the scouts split in two and took a bucket of incredibly valuable water round an assault course, and then climbed/abseiled on a tower.

Some of the scouts and leaders also managed to answer the popular question “what can we do with 4 scouts or 2 leaders, a huge 4mx0.5m concrete water pipe, and a big open field?” Fortunately there are no photos to prove anything!

All in all, it was a great camp – roll on the Summer Camp!

END_OF_DOCUMENT_TOKEN_TO_BE_REPLACED

B – is for a Brilliant camp despite – another “B” – Bank Holiday weather!
R – is for Rambunctious, a good word to describe the twenty-one Cubs and twenty-one Scouts from the 14th who camped with us and for the seven equally Rambunctious Beavers from the 14th who joined us for the Beaver Sleepover.
A – is for Activities including archery, climbing, kayaking (on a cold, windy, wet Sunday), zip-wires, Sumo Wrestling, circus skills and even a Navy-style cannon run.
G – is for Great food cooked by Maggie and Susy – and the Scouts!
G – is for Go Karts. Well done to Stuart, Jon, Ed and Jack for a great Go Kart Construction and racing activity. And well done too to Nico and John for our massively popular Tin Can football activity – featuring a hexagonal “court” this year.
E – is for Enormous numbers of kids. We were joined by hundreds of Cubs and Scouts from all over Southampton for our District Camp. All eleven Scout Groups were there.
R – is for Raging Campfire, the memory lingers – and so does the smell!

S – is for Sleep, particularly in the car on the way home 🙂


A Huge thanks to all the Leaders and Parents who worked so hard to make it happen.

END_OF_DOCUMENT_TOKEN_TO_BE_REPLACED

Eleven scouts, one young leader and three leaders ventured into the boggy realms of the New Forest for a wet weekend of swamp-based activities with the forecast predicting 40mph winds, heavy sleet and rain!! Fortunately Friday night was dry and beautifully clear so we setup the camp, cooked over a roaring fire and played a wide-game.


After a cooked breakfast on Saturday morning, the scouts split into three groups to make their own swamp-crossing using whatever means they wished. The groups came up with three ingeniously different courses using a combination of rope bridges, tree climbing, pole walking and jumping!

In the afternoon, we split into two groups and went on a 17 mile bike ride through the forest.

Rain, rain, rain! After swimming out of our tents on Sunday morning, we saw the field had really turned into a swamp! Naturally some scouts decided that puddle jumping would be fun – add to this a 15ft hole trench backfilled with clay and you can guess what happened next – “Ed(gar), Finn’s stuck in the mud!”

One cooked breakfast later and we were ready for our final activity – making an alter-fire out of sticks and mud so that we could cook our pitta-pizzas and burgers!

All in all, it was another great camp!