no images were found

Everyone bought a wooden car kit and made their own wooden cars which we raced down a track under power of gravity at our Scout Hut. There was an amazing variety of designs and there were prizes not only for the winning cars in the races but also for the best and brightest cars. We also had a barbecue, a raffle, bouncy castle, cake stall, and chocolate tombola plus our tin can football alley on the go so everyone had a lot of fun and we raised money towards some new camping gear. 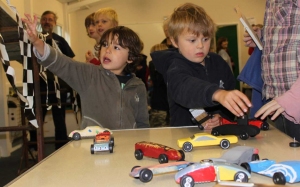 Most original design:
First: The Electric Car by Michael
Second: Dot by Finn
Third: Fail to plan, plan to fail by Joe


no images were found